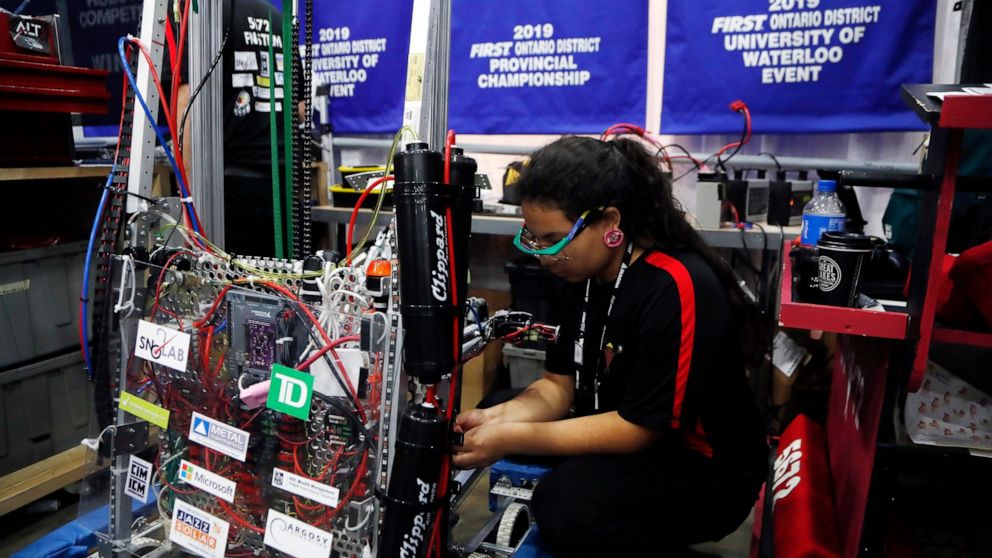 Mary Pangowish works on her tea

Mary Pangowish works on her team’s robot during the First Championship robotics competition, Friday, April 26, 2019, in Detroit. Pangowish is the captain of the First Nations STEM team that qualified for its first FIRST Championship. According to Pangowish, her Ontario-based squad is the only one here made up of all indigenous students. (AP Photo/Carlos Osorio)The Associated Press.

DETROIT — In a story April 26 about the FIRST Championship robotics competition, The Associated Press reported erroneously the first name of the FIRST president. His name is Don Bossi, not Dan.

DETROIT (AP) — Thousands of students from dozens of countries are in Detroit this week competing in the biggest youth robotics event in the world.

“Here in the United States, about 12% of schools have a FIRST team, serving 18% of the students. So, there’s still a lot of kids out there that don’t have easy access to our programs,” said Don Bossi, the president of FIRST, which stands for For Inspiration and Recognition of Science and Technology.

“And that’s our passion. That’s our mission to make these programs available and accessible to every kid everywhere.”

More than 40,000 people are attending this year’s event, including 17,000 students representing 700 teams from 35 countries.

Bossi, a former tech executive with a doctorate in electrical engineering from MIT, said the Manchester, New Hampshire-based nonprofit is trying to attract more students, including from under-represented communities.

Mary Pangowish, 17, is the captain of the First Nations STEM team that qualified for its first FIRST Championship in only its fifth year of existence.

Pangowish worked with her teammates on their robot between matches and spent time spreading the word about their journey to the Motor City.

And they did both, competing successfully in the outer space-themed matches and at one point heading outside to take part in a traditional cleansing ceremony.

“We’re kind of blazing a trail for indigenous students to follow in our footsteps, to know that they can experience the world championships, because they deserve it just as much as any other team,” Pangowish said.

The FIRST Championship also was held in Detroit last year and will be back in 2020. Matches are held during the week at the Cobo Center downtown before moving to Ford Field, home of the NFL’s Detroit Lions, on Saturday for the event’s championship matches.