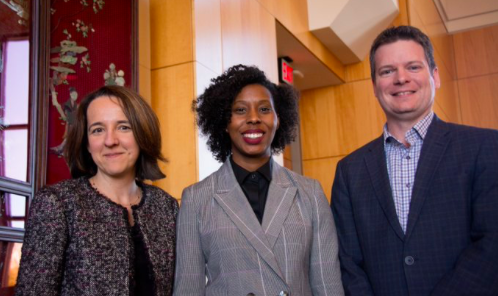 Ciara Sivels knew she was going to make history, but she really wanted to focus on finishing her Ph.D. program first.

Sivels, a native of Chesapeake, Virginia, is the first black woman to earn a doctoral degree in nuclear engineering from the University of Michigan, the top program in the country.

Sivels didn’t always want to pursue nuclear engineering. After high school, she had her sights set not on atoms but on appetites. “I was originally going to go to culinary school. In my junior and senior years, I was in culinary arts,” she said.

She took an AP chemistry class her junior year of high school, she says, and her teacher encouraged her to pursue a career in STEM. She went on to attend the Massachusetts Institute of Technology, where she majored in nuclear science and engineering.

“I remember the teacher from that class saying, ‘Oh, you’re really smart, you should think about doing something other than culinary,’” Sivels recalled. “So that’s kinda how I switched over into engineering and eventually ended up at MIT and ended up in the nuclear program.”

Congrats to my awesome friend Ciara Sivels on making history today by becoming the FIRST black woman to get a Ph.D. in Nuclear Engineering at @UMich (the #1 prog)! I’m constantly in awe of her intelligence, strength & perseverance! #blackandSTEM pic.twitter.com/jjQwc7agpU— Dr. O (@oletaknowsstuff) October 24, 2018

The road wasn’t always easy for her.

“Lots of people helped me, because there were times where I was thinking about leaving the program,” she said. “There was a point where I was like, OK, I was going to go to a different school because it’s just not working out.”

Sivels mentioned her mentors like Dr. Sara Pozzi, who collaborated with the new doctor and the Pacific Northwest National Laboratory on a new project for radioxenon detection.

“This project was initiated by Ciara and represents a significant advance in nuclear explosion monitoring,” Pozzi, Sivels’ academic adviser for her Ph.D. thesis, said. “The UM College of Engineering is becoming a more diverse and inclusive environment and Ciara’s story is a wonderful example of what we can achieve.”

Still, the lack of diverse representation in the science, technology, engineering and mathematics fields is jarring. Sivels feels there’s much work to be done on that front.

“My two big things are representation and exposure,” she said. “I feel like my path could have been a lot easier if I would’ve been exposed to things at a different time. I still feel like exposure is key and representation also helps, because you have people that look like you that can help pull you up when you’re failing.”

In a few weeks, Sivels plans to move to Baltimore to work at Johns Hopkins University’s applied physics lab. But ultimately, she wants to pursue a career in academia. “That was my goal, going into this program. I want to be a professor,” she said.

Sivels is also the founder of Women in Nuclear Engineering in Radiological Sciences, a campus organization in her department that helps connect women in the field. She wants black women entering STEM disciplines to know how important it is to “fight for what you want.”