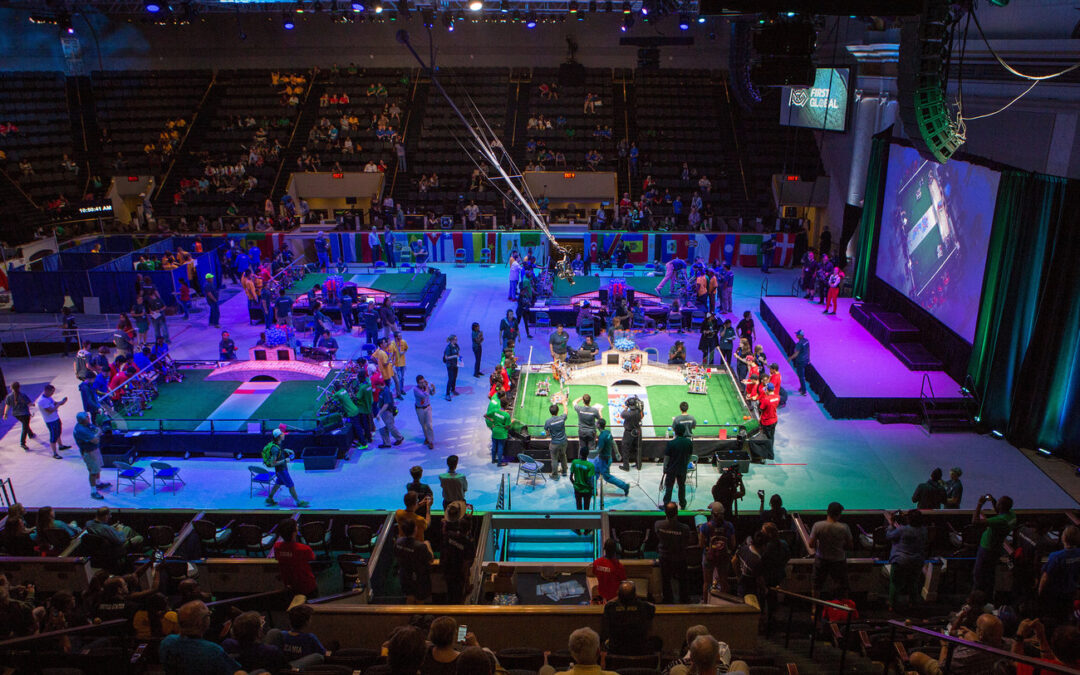 This week, the FIRST Global Challenge, a highly anticipated robotics competition for 15- to 18-year-olds from 157 countries, ended the way it began — with controversy.

On Wednesday, members of the team from the violence-torn east African country of Burundi went missing. And well before the competition even began, the teams from Gambia and Afghanistan made headlines after the U.S. State Department denied the members visas. Eventually, they were allowed to compete.

Team Honduras preps for the competition. The members, who come from a remote village, may have lacked resources, but they know that the “world today demands that we understand technology,” said one participant.Liam James Doyle/NPR

The drama marred an otherwise upbeat event focused on kids and robots.

Every team arrived with a robot in tow, each built with the exact same components, but designed, engineered and programmed differently. The goal: to gobble up and sort blue and orange plastic balls representing clean water and contaminated water.

For two days, teenagers — rich and poor, male and female — competed on a level playing field.

But there were reminders that in some parts of the world, there is no such thing as a level playing field. And no team understood that better than Team Hope, made up of Syrian refugees who had fled to Lebanon.

As Fadil Harabi, the team’s mentor, pointed out, “more than 90 percent of Syrian refugees in Lebanon don’t have legal status. They don’t have passports.”

Getting passports for the team, Harabi said, turned out to be a lot more complicated than building a robot.

The competition theme was providing access to clean water. The robots had to gobble up and sort blue and orange plastic balls, representing clean water and contaminated water, respectively.Liam James Doyle/NPR

Team Hope’s robot didn’t do very well, but every time the Syrian teens competed, they attracted a crowd that would clap and chant, “Team Hope, Team Hope!”

For Colleen Johnson, 18, a member of the all-girl U.S. team, that was what this event was all about.

Still, the technology gap between poor and rich nations was evident. For team Honduras though, that gap is due to the lack of opportunity, not just the lack of resources.

Competitors from Team Hope (center in black) test their robot in a designated practice area. The team of Syrian refugees who had fled to Lebanon drew cheers from the crowd.Liam James Doyle/NPR

“Honduras is a country where there aren’t many opportunities,” explained the team’s leader, 17-year-old Daniel Marquez.

Marquez and his teammates all come from a tiny village that is a seven-hour drive — and a world away — from Tegucigalpa, the Honduran capital. Not a single member of the team had ever handled a remote control, let alone built a robot.

“But the world today demands that we understand technology,” said Melissa Lemus, one of two girls on the Honduran team.

As the competition entered its third and final day, I checked in on Afghanistan’s all-girl team. It seemed the competitors had grown weary of the media frenzy around them.

Speaking through an interpreter, 15-year-old Yasimin Yasinzadah said she was disappointed that her teammates’ skills, and the robot they built, had gotten a lot less attention than the team’s visa problems, which nearly kept them out of the competition.

The Afghan team’s consolation prize: a medal for “courageous achievement” and knowing that they placed much higher than countries like Canada, the United Kingdom and the U.S.

The all-girls team from Afghanistan had garnered attention even before the competition began, when the U.S. State Department initially denied the members visas. They were awarded a medal for “courageous achievement.”Liam James Doyle/NPR

The awards ceremony and closing ceremony felt like one big party, not so much a goodbye. It was a celebration with a hopeful message delivered by World Bank President Jim Yong Kim.

“You are the first generation in human history that can end extreme poverty in the world,” Kim said. “And from what I saw of these robots, I know you can do it.”

His message was not lost: Intelligence and talent with a moral vision have no race, nationality, religion or gender.