Women must act now, or male-designed robots will take over our lives 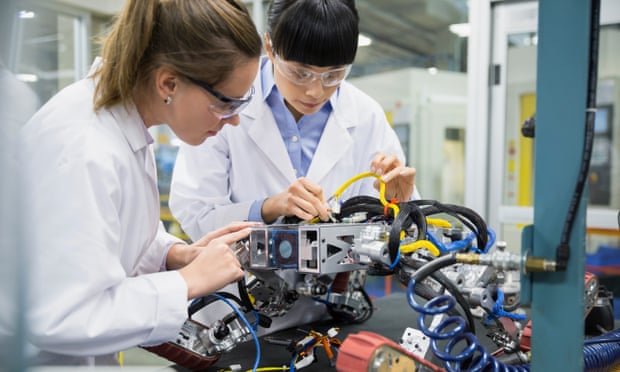 The overarching problem of men dictating the rules has found new expression in something that is currently changing the way we live and breathe: artificial intelligence (AI).

Let us be clear. There are great benefits in the use of AI and we should cherish them. However, the issue is not innovation, or the pace of technological improvement. The real problem is the governance of AI, the ethics underpinning it, the boundaries we give it and, within that, who is going to define all those.

With that in mind, I think the next fight for us women is to ensure artificial intelligence does not become the ultimate expression of masculinity.

There are many reasons to fear this could happen. First, the algorithms that codify human choices about how decisions should be made. It is not possible for algorithms to remain immune from the human values of their creators. If a non-diverse workforce is creating them, they are more prone to be implanted with unexamined, undiscussed, often unconscious assumptions and biases about things such as race, gender and class. What if the workforce designing those algorithms is male-dominated? This is the first major problem: the lack of female scientists and, even worse, the lack of true intersectional thinking behind the creation of algorithms.

Bill Gates believes governments should tax companies’ use of robots, as a way to fund other types of employment

Examples of bias were reported by the Guardian a few years back, showing that searching Google for the phrase “unprofessional hairstyles for work” led to images of mainly black women with natural hair, while searching for “professional hairstyles” offered pictures of coiffed white women. Or take Microsoft’s Tay chatbot, which was created to strike up conversations with millennials on Twitter. The algorithm had been designed to learn how to mimic others by copying their speech. But within 24 hours of being online, it had been led astray, and became a genocide-supporting, anti-feminist Nazi, tweeting messages such as: “Hitler did nothing wrong.”

What can we do about it? Obviously, encouraging more women to take up the profession and create algorithms would be a great step forward, and we are still lagging behind on this. However, we also need to start querying the outcomes of the decisions made by algorithms and demand transparency in the process that leads to them. Although the new EU General Data Protection Regulation does not go far enough, it does broaden the definition of profiling activities, thus providing us with tools to avoid profiling-based decisions by questioning them. There are no legal certainties yet about how far the new European regulations, which come into force on 25 May, can be taken, but pressure must be applied to ensure AI algorithms are not just powerful and scalable but also transparent to inspection.

Of course, the problem of AI goes beyond this. Some academics, such as Joanna Bryson and Luciano Floridi, argue that AI companies should be regulated like architects, who learn to work with city planners, certification schemes and licences to make buildings safe. They argue for watchdogs and regulators.

It is encouraging that in the UK the government has set up the Centre for Data Ethics. This new body is tasked with advising on the measures needed to enable and ensure safe, ethical and innovative uses of data-driven technologies. Tech UK, which represents the tech industry, is also having conversations on the subject. For the feminist movement, the challenge is to frame the debate and not to let others decide for us.

And let’s not forget the impact on the labour market, with women projected to take the biggest hits to jobs in the near future as a result of automation replacing human activities, according to the World Economic Forum. Women are more likely to be employed in jobs that face the highest automation risks. For example, 73% of cashiers in shops are women and 97% of cashiers are expected to lose their jobs to automation. The same report predicts that persistent gender gaps in science, technology, engineering and mathematics (Stem) fields over the next 15 years will also undermine women’s professional presence.

And if robots are taking human jobs, we need to figure out how we would deal with a large jobless population. Bill Gates believes that governments should tax companies’ use of robots, as a way to at least temporarily slow the spread of automation and to fund other types of employment. And many now suggest that universal basic income is probably the only solution to the rise of robotic automation. This is appealing to many but it does pose questions from a feminist perspective: if the only jobs available will be in science and technology, how is that going to work for women in the light of the gender gaps in those professions? If we followed that route, would we be paving the way to men at work and women at home?Google’s AI is being used by US military drone programmeRead more

What we need is a progressive, enlightened digital politics aimed at getting the most out of technology: a better environment, better healthcare, a better work-life balance. To achieve that, we need better governance of AI – and women must be at the heart of this.

The Fabian Women’s Network has decided it is time to take action and throw our weight behind the cause. This month, we are launching our Women Leading in AI series. At the first gathering on 22 May, we are bringing together some of the most interesting and thought-provoking female voices on AI, ranging from business and academia to thinktanks. It is time for women not only to investigate what AI means for us, but also to make sure we frame and lead the debate about its governance and purpose, so it becomes a force for the common good and not the ultimate expression of masculine control.

• Ivana Bartoletti is a privacy and data protection professional, and chairs the Fabian Women’s Network