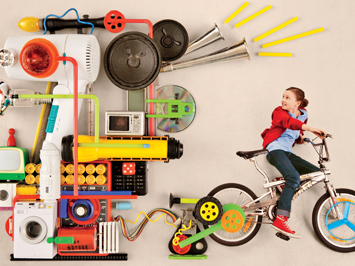 The competition was stiff at the 2014 Broadcom MASTERS National Science Fair—among the 30 middle school finalists were students presenting on subjects as far-ranging as acoustic levitation and ant pheromones as indicators of food quality. In the end, it was two 14-year-old girls, both from California—Holly Jackson of San Jose and Sahar Khashayar of Laguna Niguel—who walked away with the top prizes. Jackson won the grand prize for Sewing Science, which examined the strength of sewing stitches in various applications (an important consideration in, for example, the car industry, where stitched-together seat belts are at the front line of vehicle safety). Khashayar created a Bluetooth-enabled device that detects heat, smoke, and infrared radiation; it is her hope that similar devices can provide an early warning system for wildfires.

Jackson and Khashayar are motivated, highly capable young scientists. Yet far too many girls lose their interest in science during the junior high years, with even more opting out of science, technology, engineering, and math (STEM) courses in high school and college. Despite great strides toward gender equality in the United States, women are still much less likely than men to study or work in the science fields.

Standardized tests reveal virtually no gap in academic ability between boys and girls. Yet while women now outnumber men in college, they earn just 20 percent of all bachelor’s degrees in engineering; along with engineering, computer science and physics remain male-dominated fields.

And the evidence suggests that children start internalizing the idea that science and engineering are “just for boys” at a very early age. According to a 2009 poll of children ages 8 to 17, only five percent of the girls expressed interest in an engineering career compared with 24 percent of the boys. Nearly three quarters of college-bound boys ages 13 to 17 thought computer science might be a good major for them, while only a third of the girls agreed.

That’s troubling, both because careers in STEM fields tend to be lucrative and secure, and because society as a whole benefits when women’s perspectives are included in engineering, design, and innovation. (An example cited in the AAUW report Why So Few? Women in Science, Technology, Engineering, and Mathematics: A predominately male group of engineers designed the first automobile air bags to accommodate adult males, resulting in unnecessary harm to many women and children.)

Encouraging girls’ continued interest in STEM is good for girls, and good for the rest of us.

What’s Coming Between Girls and STEM

Today, very few people blatantly tell girls that they can’t do science or math—or anything, for that matter. Yet girls continue to struggle against media messages suggesting that beauty and popularity are the keys to success. They’ve also inherited a cultural legacy that has long been stacked against women.

For years, science, technology, and math were the realm of men. And the heroes noted in our classrooms and culture—Thomas Edison, Steve Jobs—are still overwhelmingly male. As a result, girls are much less likely to see people in STEM fields who remind them of themselves and to consider STEM careers as viable.

According to the research, three major obstacles contribute to girls’ decreased interest in the STEM fields.

1. Stereotype threat. The idea that girls are no good at math is so engrained in our culture that simply “bringing to mind that stereotype can actually lower the performance of girls,” reports Christianne Corbett, coauthor of Why So Few? Research shows that girls don’t even have to believe that the stereotype is true for it to have a negative effect on them.

2. Implicit bias. “A lot of the evidence suggests classroom behaviors are skewed toward boys,” says Dale McCreedy, director of gender and family learning programs at the Franklin Institute. Implicit bias is unconscious, he notes, and can be as subtle as teachers’ calling on boys more often than girls or responding more enthusiastically to boys’ responses.

3. Lack of awareness of the depth and breadth of STEM. Too many people still think that “science is on a bench; it’s being in a lab coat,” McCreedy says, when the reality is that STEM professionals work on everything from cell phones to pharmaceuticals, fragrance to food science, and bridges to biotechnology.

Getting Girls (and Boys) Excited About STEM

There’s a lot you can do to encourage students’ interest in STEM—and helping the girls in your class will also help the boys.

“Gender equity is important for everyone. It’s not about teaching girls a certain way. It’s about being responsive to everyone’s needs,” says Brenda Britsch, co–principal investigator with the National Girls Collaborative Project. “You want everyone to have enough information, foundation, and positive experiences so they have the opportunity to do what they want to do.”

In the early years, focus on hands-on projects that allow students to exercise their problem-solving skills. Peggy Carlisle, a gifted-education teacher at Pecan Park Elementary School in Jackson, Mississippi, challenges her second graders to build a structure that can support the weight of a quarter for at least 15 seconds using index cards, a ruler, and 12 inches of tape (straws or pipe cleaners optional). Kids work in teams, brainstorming and revising. “Unsuccessful attempts are an important part of the learning process,” says Carlisle, who doesn’t set time constraints.

Group work is great for students of all ages, but be careful. Sometimes more reticent students let other students do all of the problem solving or hands-on work. Rotate groups and group assignments so that all students get a chance to handle materials, problem-solve, and record data.

One of the reasons stereotypes regarding girls and science and math are so powerful is because people tend to believe the ability is something you have or you don’t. But “what makes you good at mathematics or science is hard work and effort,” says Diane Briars, president of the National Council of Teachers of Mathematics. Students who believe their abilities can grow with practice are much more likely to persist than those who believe they possess limited ability. (See also “The Fear of Math”) And while research suggests that males may have a tiny edge when it comes to visual spatial processing—a key skill in engineering—research also suggests that girls can improve their visual spatial abilities with practice.

Tangrams are a great tool to help students develop these skills. A tangram is a geometric puzzle based on a square that’s been separated into seven smaller shapes; the shapes can be rearranged to re-create the square or other geometric figures. Capture students’ interest with the Osmo system, which attaches to an iPad and encourages children to re-create shapes and designs shown on the iPad with tangram manipulatives.

According to Cascading Influences: Long-Term Impacts of Informal STEM Experiences for Girls, a report coauthored by the Franklin Institute’s McCreedy, girls’ positive attitudes toward science at age 10 significantly declines by age 14. Their interest in STEM fields, in particular, drops way off during the middle school years, despite the fact that girls are academically as capable as boys. Teachers say that part of the problem is intense peer pressure.

In the middle school years, “some of the girls don’t like to show that they’re smart,” says Susan German, an eighth-grade science teacher at Hallsville Middle School in Missouri. Also, many students have a limited understanding of what STEM is, so you may need to work to expand their horizons with real-world examples.

Bring STEM professionals—both female and male—into your classroom, and make sure they’re comfortable speaking with tweens and teens. An engineer who speaks only in jargon might reinforce the idea that STEM is for “other people,” while one who talks plainly about, for instance, bringing water to underserved populations might pique students’ interest.

There’s no quick fix to the continued underrepresentation of girls in STEM. However, teachers who help students see, understand, and experience the creative contributions of STEM to society, while working to alleviate stereotype-related pressures, are part of the solution.